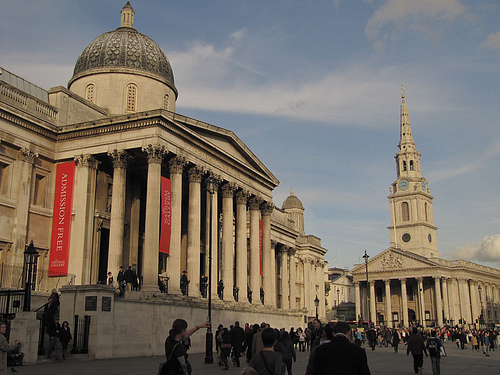 In the heart of London, the colonnaded facade of the National Gallery dominates the north side of Trafalgar Square.

Set up in 1824 with an initial collection of 38 paintings, the now-massive National Gallery was founded “for the nation and the benefit of all.” The main gallery was built in 1834, and has expanded as the collections have grown.

Inside, the National Gallery is huge, with soaring ceilings and a seemingly endless number of gallery rooms. Before launching in, it’s best to create a game plan; pick out a few things you’d love to see…and try to let the rest go. No human being has ever seen the entire National Gallery in one visit, and neither will you.

Over the years, through generous donations and acquisitions, the National has built up a collection of more than 2,300 paintings. The majority of these are on permanent display in the gallery, in chronological order: early Renaissance (1250-1500); High Renaissance (1500-1600); Dutch, Italian, French and Spanish painting (1600-1700); Venetian, French and English painting (1700-1800); and English, French and German painting (1800-1900). There are works here by almost all of the world’s great artists, including Leonardo da Vinci, Rembrandt, Reubens, Caravaggio, Monet, Renoir, Van Gogh and Constable. 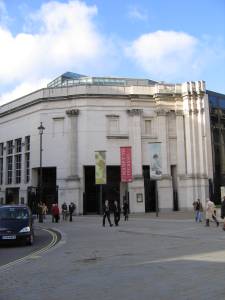 As well as the permanent collections, there are also special exhibits and retrospectives of paintings from the Gallery’s own collections and those of other galleries and museums.

These special exhibits are generally shown in the Sainsbury Wing (right), which can be reached through its own entrance or via the main building.  Halfway down the Sainsbury’s large staircase, you’ll see the entrance to the National Dining Rooms, an elegant restaurant that specializes in the produce and cuisine of Great Britain. Open daily from 10am-5.30pm (Wed 8.45pm); there are also a couple of other cafes around the main building.

Note: Trafalgar Square is almost entirely off limits to vehicles, making the plaza in front of the Gallery a wonderful bonus for visitors; it’s safe to wander freely down to the Square’s enormous bronze lions (a favorite for photo opportunities), Nelson’s Column, the Fourth Plinth and the surrounding fountains.

The National Gallery is open almost everyday from 10am-6pm (Wed 9pm), and is only closed 24-26 December and 1 January.