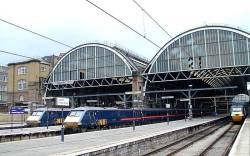 London is the railway hub of Britain, with rail lines reaching out to all corners of the country.

There are 10 major rail terminus in the city, all within about a mile and a half’s radius in central London.

Most stations are busy but user-friendly, with restaurants, shops and full amenities.  Here are links to information on their locations, facilities and routes:

Since the privatization of the UK railways in the 1990s, there are now 35 major rail companies operating in England. Click here for a complete list of their websites.

To search for fares and timetables, the Network Rail website is a good place to start.