Origin of London’s tourists is changing 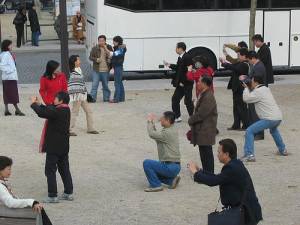 Some interesting figures released by Visit London about the origin of tourists coming to London. The Guardian reports that for the first time Indian tourists spent more in London last year than did those from Japan and that while the number of Indian visitors has almost doubled in three years, there’s been a steady decline in the amount of Japanese choosing to visit London, down from 434,000 in 2000 to 230,000 last year.

The story doesn’t say why this should be, but I guess the growing middle class in Indian are doing well and want to spend some of their new wealth on foreign holidays and London would seem a natural choice given the links between Britain and Indian, lack of language problems and London having a large Indian population for the last 40 years. Also the number of Bollywood movies being filmed here would put London locations in people’s minds. As for the down turn in Japanese visitors, maybe their economy is not in great shape or places like Australia are now a prefered destination.

Visit London says it expects the strength of the pound against other currencies will deter a number of visitors from coming this year and I can imagine quite a few tourists getting a shock when they change their money and then get a load of the London prices, they’ll do damage to anyone’s budget.