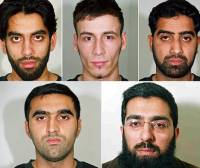 This bunch of happy campers on the left are the latest crew of British muslims locked up for planning bombings in the UK, in their case the targets included the Bluewater shopping centre, the Ministry of Sound, a football stadium as well as gas and electric supplies.

The good news is the judge at least gave them a decent amount of jail time for once, the bad news from reading and hearing all the news reports on the case is the number of similar guys that MI5 and the police are watching, probably in the thousands. The fact is that another attack in London like the one in 2005 is more than likely going to happen, there are just too many brain washed nutcases running around in Britain.