In London somebody will be watching you 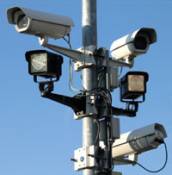 The Evening Standard has a pretty revealing story about the number of cctv cameras in the UK. It turns out we have 1% of the world’s population but 20% of the world’s cctv cameras watching us, 4.2 million of them and growing, making us easily the most secretly filmed people on the planet. The average Londoner will be picked up on cameras 300 times a day.

The government and the police love them because it gives the impression they’re protecting the public and is much cheaper than actually putting cops on the street, but it doesn’t stop crime, it only helps to solve it. Not much comfort if you’ve just had a knife in the guts while getting mugged.

There is definitely a ‘big brother’ style creep in this country with Labour gung-ho for id cards, face and car recognition cameras and road pricing tracking technology in cars. If you come to the UK be aware that if you’re in an urban area the chances that someone has a camera on you at any particular moment are pretty high.