Taking the Eurostar from London to Paris or Brussels 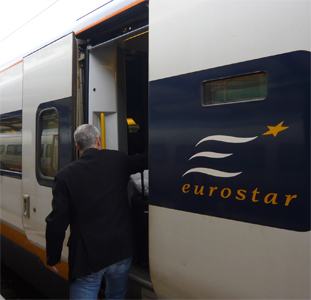 The Eurostar train through the Channel Tunnel is the best, fastest and most comfortable way to travel between London and Paris, France or Brussels, Belgium.

However, taking the Eurostar isn’t exactly like taking a normal city-to-city train in Europe. There are a few things you need to be aware of before booking and traveling.

Fares and Tickets for the Eurostar

Unlike most trains in Western Europe, Eurostar is not covered by railpasses and always requires a separate, reserved ticket.

Buying early and booking an off-peak train will get you the lowest fares, while buying on the same day for the peak-time train will generally cost a small fortune. The cheapest tickets are non-changeable and non-refundable, so it’s important that you are ready to confirm before buying them.

Eurostar’s three classes of service are:

Standard: Most spare and affordable option, with no amenities; seats are fairly narrow, and you won’t have much legroom. In this class, travelers under 26 or over 60 years old can book tickets at as much as a 50% discount.

Standard Premier: Costs 50% more than Standard (with no youth or senior discount) for more leg/elbow room, a newspaper, a small meal and power plugs at seats.

Business Premier: Tricked out with many of the same amenities available on a first-class flight, a seat in this luxurious class can cost as much as $425 US one-way, $125 US more than in Standard class.

* In all classes, children under 4 can travel for free, as long as they can share their adult guardian’s seat.

At the moment, the Standard rates for London-Paris are:

You can check all the ticket conditions and the current rates for Eurostar tickets from London-Paris here.

And the Standard rates for London-Brussels are:

You can check all the ticket conditions and the current rates for Eurostar tickets from London-Brussels here.

Eurostar tickets may be booked online as many as 9 months in advance.

You can also book by phone:

Stations for the London/Paris/Brussels Eurostar

St. Pancras International Station, in the central London neighborhood of King’s Cross, is the biggest Tube interchange in the city. A destination in itself, St. Pancras features a shopping mall with three restaurants and an elaborate food court. Click here for directions to the station.

Gare du Nord, in north-central Paris, is convenient to most of the city’s tourist areas and is connected to the Paris Métro by several lines. An underground tunnel takes you to the La Chapelle station on the #2 line, which leads directly to Montemarte and the hotel district near the Champs Elysees.

Gare du Midi/Zuid, in central Brussels, is 5 minutes from the Grand Place, the most touristed part of the city. The station is served by the metro (Line 2), the Premetro (Tram Tunnel) and the suburban rail services, all accessible from the main station.

Check-in is required 30 minutes before departure for security screening; however, because of the potential for crowds, it’s advisable to arrive for check-in an hour in advance. Carry-on luggage is limited to two large bags and a small day bag per person; all bags must be tagged with your name and address. Smoking, animals (except for guide dogs), and dangerous materials are not allowed. Children under 12 must be accompanied by an adult.

Once you’ve checked in, you’ll be in an international lounge with a bar, café and some shopping opportunities. About 15 minutes before departure, boarding will be announced, and you can make your way onto your coach and be seated.

The Eurostar trains usually leave on time, so again, make sure you are there early. You can usually select your seat in advance, or at least choose an aisle or window seat. There are two catering cars on board, as well as restroom facilities.