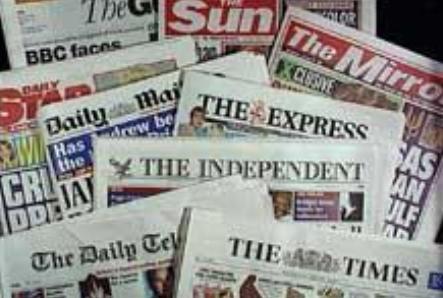 If you still like to get some of your news the old-fashioned way – walking up to a newsstand (or, as they’re locally called newsagents) and buying a paper – then London is your kind of town. Newsagents here have racks fairly bulging with national dailies, divided into the quality or broadsheet papers, the tabloids, and a wide variety of independents.

The top quality dailies include:

The Daily Telegraph
Traditionally a right wing, conservative paper, the Telegraph has the largest circulation of the serious dailies

The Guardian
Originally the Manchester Guardian, this left wing paper is the city’s third-largest broadsheet

The Independent
Liberal-leaning paper launched in 1986

The Financial Times
Printed in a distinct salmon pink colour, a business paper printed six days a week that takes a center/right standpoint

The main tabloids are:

Daily Mail
Second in circulation to The Sun, the favorite of right wing, middle class England

The Mirror
All the same garish trimmings as the Sun and Mail, but from a more left wing perspective

The Sunday Times
The best-selling Sunday paper and probably best value; it costs £2 and weighs about the same.

Evening Standard
Comes out late morning and produces later editions through the afternoon. It covers world and London news and sport, and on Thursdays includes a free entertainment guide called Metro Life.

The Stage, aimed at actors and other members of the entertainment industry

The Voice, which speaks to the city’s black community