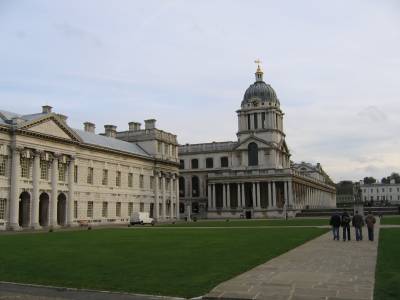 One of the nicest parts of London for a visitor to spend a day is Greenwich, about five miles east of Westminster, right on the banks of the River Thames.

If you look on a map Greenwich is at the bottom of that big horseshoe the Thames makes and it’s position gives great views up river, across to the Isle of Dogs and the financial buildings in Canary Wharf and down river you get a good look at that white elephant, The Millennium Dome.

To get to Greenwich, take the Docklands Light Railway heading for Lewisham. There are two stops where you can disembark: Cutty Sark for Maritime Greenwich or Greenwich. Get out at Cutty Sark station it’ll put you right in the middle of town; the Greenwich stop is about a ten minute walk away.

The other way to get there is by river boat from Westminster, the London Eye or Tower Hill. There are a number of operators but they all seem to charge similar prices; £7 seems about the price from Westminster to Greenwich one way, £9 return. 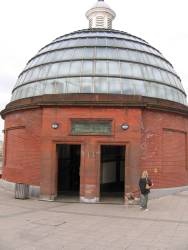 If you’re going in the autumn and winter, wear some warm clothing: the river’s wide and open down that stretch and the wind can really pick up off the water.

When you walk off the boat and out of Greenwich Pier, straight in front of you is the Cutty Sark, a 19th century tea clipper in dry dock, and to the right is a circular red brick building with a glass domed roof. You might think its some old Victorian public toilet but it’s actually the entrance to the Greenwich foot tunnel that runs all the way under the River Thames to the Isle of Dogs.

It was opened in 1902 to allow dock workers living on the south side of the river to get to work at the Millwall docks. It’s still open today, 24 hours a day, there are elevators but they only run from from 5am-9pm. The walk shoudn’t take more than five to ten minutes to get to Island Gardens on the other side and not only can you say you’ve walked under the Thames but you’ll have a good photo oppurtunity from the north side of all the great buildings on the Greenwich bank.

The Cutty Sark is a 280-foot sailing clipper that was launched in 1869, carrying produce from Britain to the Far East and tea back from China. After a few years, she was carrying cargo to/from everywhere from China and Japan to Australia, America and Europe. She was renowned for her speed and went from Australia to Britain in 73 days. Her final voyage was in 1938 and she went on display at Greenwich in 1958.

The central part of Greenwich is a lively place and fairly small so its easy to walk around and see what’s there. As well as being a major tourist area, Greenwich has a University in the Old Royal Naval College buildings on the banks of the Thames, one block from the Cutty Sark; that mixture of visitors and students makes for a great selection of restaurants, bars and shops. 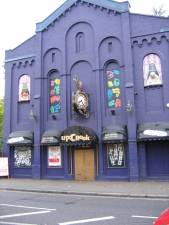 Walk up past the Gypsy Moth pub and head in the direction of the large church tower, St Alfege’s Church, and you’re on Greenwich Church Street. You’ll find tapas bars, Tex-Mex, noodle bars and even a traditional English pie and eel house.

If you take a right turn down Creek Road and cross the street you’ll find a comedy club called Up The Creek that looks like its taken over a large old church and painted it purple. They have comedy show’s Friday and Saturday nights with a DJ to follow and special show’s on Sunday’s with bands as well as comedy. They also have a restaurant and bar that are open until 2am.

Take a left turn down College Approach road and on the right is Greenwich Market, through the pillared entrance way halfway down the street. This is a busy little market of small individual stall holders under a covered area selling anything from arts and crafts to clothes, jewllery, furniture and all kinds of second hand stuff. 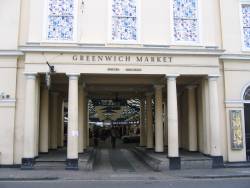 A large proportion of the stalls seem to be run by Chinese women, it maybe just coincidence or maybe they’re students making a little extra cash, it only costs £10 to have a stall there Thursday or Friday. It’s also open Saturday and Sunday and there are a few food stalls regular shops around the edges.

If you stand with your back to the river and look up towards the road, the two large buildings with domed clock towers are Queen Mary Court on the left and King Charles Court on the right, both used by the university. Looking past them over the road is the white two storey Queen’s House, part of the National Maritime Museum and located in Greenwich Park. 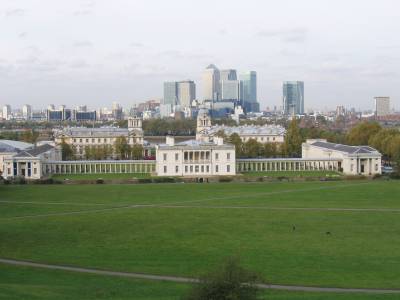 Greenwich Park is one of the Royal Parks and as well as being home to the Maritime Museum it also includes the Royal Observatory and the Greenwich Meridian Line. Once you go past the Museum there’s a large open grass area that’s criss-crossed by paths that leads up the hill to where the Observatory is. It’s one of those places that have always been occupied because its the only hill overlooking the Thames on its eastern approach and if you’re in Greenwich you have to walk up for the views and to get your picture taken with everything in the background.

The park looks pretty popular with joggers and runners and the inclines of the hill would give a good workout, ther’s also enough space to stay clear of groups of tourists. Greenwich Park is open from 6am-dusk year round.

At the top of the hill leading away from the Observatory is Blackheath Avenue, a long straight treelined road and a little way along on the left is The Pavilion Tea House, a cafe that has a large outdoor seating area and is open from 9am-8pm in the summer, 9am-4pm in the winter and they do serve alcohol.

The main road leading back down the hill and out of the park is King William Avenue and it comes out to the left of the museum. Right near here is Greenwich Theatre which has a changing schedule of productions.

The University of Greenwich has 20,000 students, around 4,000 from overseas and has a large campus on the banks of the Thames in the home of the Old Royal Naval College.

The buildings were built by Sir Christopher Wren in the late 16th and early 17th century and form part of the Maritime Greenwich World Heritage Site.

The University took over some of the main buildings in 1999, a year after the Royal Navy stopped using the site; Trinity College of Music moved into the King Charles Court building in 2001. If you walk past Greenwich Market and through the gates at the end of College Approach, you’ll hear music students practicing their craft.

Greenwich must be just about the grandest university campus in London, big and imposing with columns everywhere, but nicely spread out with a large manicured lawn are in the centre. If you walk down to the riverside, Canary Wharf rises above the trees from the other bank. Go further down the bank towards the Trafalgar Tavern and you’ll get a good look at the Millennium Dome which sits at the head of the next bend down river.

There’s no problem walking around here but if you’re taking photos try to come on a sunny day, the light will just lift the architecture in the pictures. A number of films have shot scenes around the college including Patriot Games, Lara Croft: Tomb Raider and Four Weddings and a Funeral, among others.

If you’re in London for a visit spending a day in Greenwich is well worth your time, its more relaxed than central London with a less frantic pace. There’s a lot of good things to see, the Maritime Museum, the Observatory, the Naval College are all free and the town’s compact enough that you aren’t going to get tired walking around it.