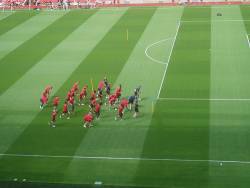 Professional football clubs across London have been finalising their pre-season fixture schedules for the second half of July and the beginning of August. The players generally come back from their summer holidays around the end of June and after a couple of weeks of hard training start taking part in warmup games. Some clubs like Chelsea will be playing all their games overseas, others such as Arsenal have a mixed schedule. If you haven’t yet booked a ticket for the Emirates Cup tournament that Arsenal are hosting here are some other games on in London, just in case you can’t wait for the regular season to start for a football fix.

15 July Queens Park Rangers v Celtic This game kicksoff at 2pm on a Sunday afternoon, so if you see thousands and thousands of Scotsmen around West London that day you’ll know why.
24 July Leyton Orient v West Ham Kicksoff at 7.45pm at Brisbane Road in East London, Orient just avoided relegation from League One last season so should provide a gentle workout for West Ham’s Premiership stars.
25 July Brentford v Reading Reading were the surprise team of the Premiership last season, see them get a run out against The Bees, 7.45pm at Griffin Park.
31 July Brentford v Chelsea XI 7.45pm at Griffin Park but note the ‘XI’, Chelsea are also playing a game against Brondby in Denmark that evening.
1 August Leyton Orient v Tottenham Another 7.45pm kickoff, will Berbatov still be wearing a Spurs shirt, what about Jermain Defoe, Spurs fans can see for themselves at Brisbane Road.
3 August Queens Park Rangers v Fulham OPR’s and Fulham’s stadiums are only about 2 miles apart, but I think Chelsea, also very close, are the bigger rivals for these two. Should be a decent game, an 8pm Friday night match.
4 August West Ham v AS Roma A 3pm Saturday afternoon kickoff is West Ham’s final tune up against a team who were runners-up in Serie A last season.
4 August Crystal Palace v Everton Palace’s eighth and last pre-season game and their only one at home. Its a 3pm kickoff against the Toffees at Selhurst Park.
4 August Brentford v Southampton Brentford get another home game against higher opposition, this time Championship side Southampton. Kickoff 3pm.
4 August Watford v Willem II Newly relegated Watford get some practice against Dutch First division team Willem II, Total Football all round.