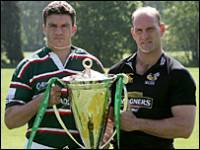 This weekend London hosts the climax to not only the club football season in England but also to European club rugby. On Saturday afternoon at 3pm the new Wembley Satdium gets its first showpiece event, the FA Cup Final between Manchester United and Chelsea and on Sunday at 2.30pm Twickenham hosts the final of the Heineken Cup, club rugby’s Champions League.

Chelsea v Manchester United should produce a good final, plenty of skill on both sides and both teams determined to win. United have the FA Cup pedigree winning it 11 times, the last in 2004. Chelsea have only won it 3 times and their last appearance in a final was in 2002 when they lost to the mighty Arsenal 2-0. The two clubs have met once in the final itself, in 1994 when United won a one sided game 4-0. Man.United manager Alex Ferguson has a great FA Cup record, winning 5 finals and losing 2, but his record in games against Jose Mourinho’s Chelsea isn’t great, he’s won 1, drawn 3 and lost 4.

Chelsea will need that omen because their form coming into the final is poor. They finished the Premiership season with 5 draws and got knocked out of the Champions League during the same period. I’m going for a 2-1 Chelsea win, they seem to be able to close down Rooney and Ronaldo pretty well in all the games I’ve seen them play.

While 90,000 have the Wembley experience, £8 hamburgers and all on Saturday, 82,000 rugby fans will fill Twickenham to see two English clubs Leicester and Wasps fight to lift the Heineken Cup. Leicester were also there last weekend winning the Guinness Premiership title and are going for the treble of domestic league and cup as well as being European Champions.

Both teams are packed with experienced international players and both have former England captains, Lawrence Dallaglio for Wasps, Martin Corry for Leicester. Wasps haven’t had a game for three weeks while Leicester have been playing some intense games, and its hard to know who’ll this will favour. Leicester are solid 1-3 favourites but as Wasps are a London team I’ll tip them to win 29-25.

Both these games are sold out any the only way you’ll get a tciket is by paying over the odds to a tout. Better to find a nice bar to watch them in, there should be plenty of atmosphere.