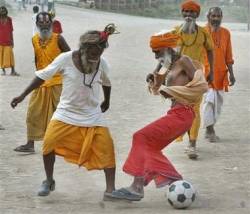 London has four of the world’s top 25 most valuable football clubs according to a new report form Forbes magazine. Manchester United and Real Madrid are numbers 1 and 2 but even as a fan I was surprised that Arsenal rated as the third most valuable team in the world with a value of $915million.

If they are worth that they missed a trick when building the Emirates stadium, because its been a 60,000 sellout for every match this season and they could easily have filled an 80,000 seat stadium and made almost a million pounds extra a game. The one problem with the Emirates is the time it takes for fans to get away after the match has finished, due to lack of public transport and over zealous policing.

The other London teams to make the Forbes list are #8 Chelsea, value $537million, #14 Tottenham, $243million and #23 West Ham, $156million. Tottenham look like a club ripe for a takeover, solid support, a good manager and able to maintain a position in the top half of the Premiership.

West Ham on the other hand were bought by an Icelandic millionaire last summer but look certain to be relegated this season and lose out on the tv millions being in the Premiership brings.

The major clubs in England stand to make even more money after the Football Association today signed a £425million four year deal to switch live FA Cup games from the BBC to ITV. The rich only getting richer.