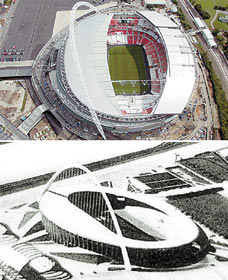 Great picture in the Standard today showing the new Wembley Stadium and the 1941 design for a new stadium in Rio de Janeiro by Brazilian architect Oscar Niemeyer. At first glance they’re almost identical although Wembley’s arch is slightly bigger.

Wembley’s architect was Sir Norman Foster who also designed London’s City Hall and ‘Gherkin’ building, the Great Court at the British Museum, Stansted’s main terminal as well as Chep Lap Kok airport in Hong Kong among many other projects. The Standard says Niemeyer is still working at 99 and isn’t worried by any of the similarities between the two stadiums, but he must have had a little smile to himself and thought ‘years ahead of my time’.

Now that Wembley is all but finished the politicians have started showing up, Chancellor of the Exchequer Gordon Brown and Culture Secretary Tessa Jowell were on photo call duty down there today. They were trumpeting their support for an England bid for the 2018 World Cup despite the fact that the host country won’t be chosen until around 2011, but they could be long out of power by then so might as well score some points now.

England is in fact a bit of a shoe-in to get the 2018 tournament. The World Cup goes to Africa in 2010, somewhere in the Americas in 2014 and its Europe’s turn again in 2018. By then it’ll be 52 years since England hosted it, in that time Germany have had two World Cups and France, Italy and Spain once each. Outside those countries there’s not many others in Europe that have the number of stadiums or infrastructure needed, England has to be the favourite.