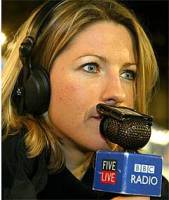 The BBC had a sporting first yesterday when they used a female commentator for the Premiership football match between Fulham and Blackburn. Jacqui Oatley was the lady who got the call and the press today have been saying what a good job she did and anybody who disagrees is a knuckle dragging sexist.

The highlights of the game she did were on the BBC’s Match of the Day evening show and while anyone is better to listen to than MOTD’s John Motson, to me something seemed a little wrong. The columnists in the papers say she’s highly qualified and knows her stuff, she can tell you the birthday of every player in the World Cup since 1930, that sort of thing, but on a first listen I’d compare it to a middle class, white English guy rapping. He could probably do a competent job but it just wouldn’t sound right.

Jacqui Oatley did nothing wrong, her voice does go a little high when a goal goes in, but it just didn’t sound right to me.