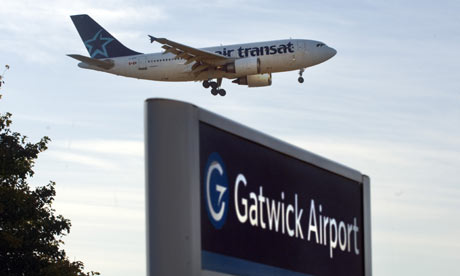 It should be easy to find flights into London Gatwick from within Europe and North America, but it’s not nearly as popular when coming from greater distances. If you can’t immediately find cheap airfare into Gatwick, use the airport code LON to research flights into all London airports.

Flights from Europe
You can find a flight into London Gatwick from nearly any city in Europe, including the United Kingdom and Ireland. Many low-cost airlines use Gatwick, so competition is high and airfares tend to be as low.

Flights from North America
There are flights into London Gatwick from about 10 major US cities, as well as most large Canadian cities. Flying from New York City is usually the least expensive North American route; flying from the West Coast requires a change of planes before crossing the Atlantic.

Flights from Asia
You can fly nonstop from Hong Kong to London Gatwick, and sometimes fares are very low. From other major Asian cities you’ll often have to change planes in Hong Kong or the Middle East. For long distance flights, be sure to research flights using the LON code to find the best prices and routes.

Flights from Africa
Many of the major African capitals have flights into London Gatwick, but it’s worth comparing fares to London Heathrow (LHR).

Flights from Australia
From Australia, you can reach either Gatwick or Heathrow with a single plan-change in either the Middle East or Hong Kong.

To get from Gatwick to central London:

Black cabs/taxis are also available, outside both North and South terminals.