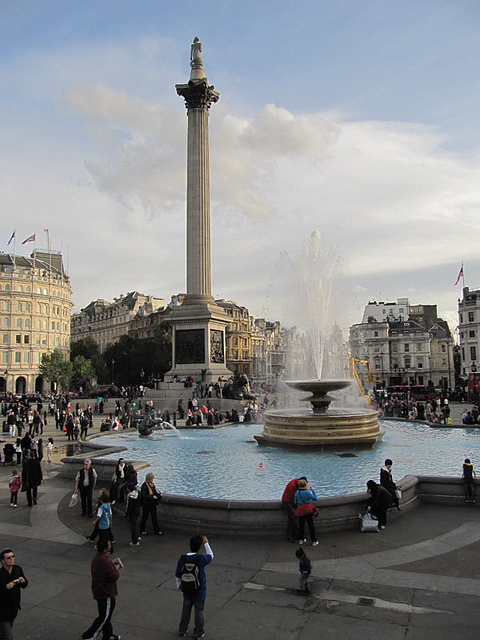 Trafalgar Square, right in the center of London, is a major meeting point for the city’s roads, local Londoners and tourists. It’s always been an important gathering place, and is full of iconic London buildings and monuments.

The Square in its present form was built in the 1840s. Its name was changed to Trafalgar Square from Royal Mews in honor of Britain’s defeat of Napoleon at the Battle of Trafalgar in 1805.

Since 1842, the focal point of the Square has been Nelson’s Column, an 18-foot statue of Admiral Lord Nelson, (the victor at Trafalgar) atop a 151-foot column. The huge central fountains were added in 1845, and to guard Nelson’s Column, four large lions (designed by Edwin Landseer) were added  in 1867. These big cats have ever since provided an opportunity for tourists to climb aboard and take iconic London souvenir photos. 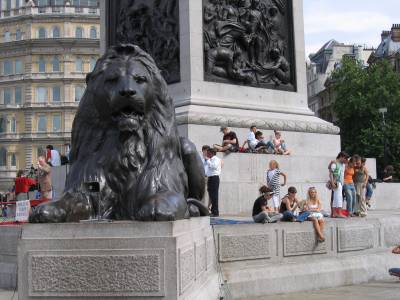 There are four sculpture plinths on the Square, and three play host to bronze statues of famous war heroes and King George IV; the fourth plinth, by the northwest corner of the Square, remains empty. The local government runs a program called the Fourth Plinth, which commissions and monitors public feedback on a rotating series of artworks that are temporarily displayed on the fourth plinth.

On the northen side of the Square, facing Nelson’s back is the imposing building of the National Gallery and National Portrait Gallery, with their huge collections of European and global art. The road in front of the Galleries is off limits to automobile traffic, making the entire Square user-friendly for pedestrians.

On the west side of the Square, between Pall Mall East and Cockspur Street, is Canada House, home of the Canadian High Commission. 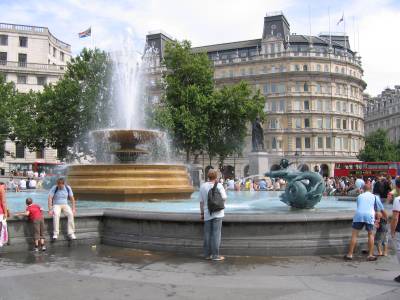 Anti-apartheid demonstrations haven’t been the only protests held at the Square. For example, in 1990, 200,000 people converged here to protest then-Prime Minister Margaret Thatcher’s hotly-contested Poll Tax; the subsequent rioting was some of the most violent Britain has ever seen. Trafalgar Square is often the main gathering point for any large demonstration or organized protest in London, as apart from Parliament Square and the Royal Parks, there’s no public area in central London that can hold such large crowds.

For the same reason, Trafalgar Square also plays host to many annual cultural events, including Chinese New Year, St Patrick’s Day and Diwali celebrations. Each December, a huge Norwegian Spruce Christmas Tree, given since 1947 by the people of Norway for Britain’s for support in World War II, is erected, lit and decorated in the Square in traditional Norwegian fashion.

Just to the east of the Square’s northern side, be sure to visit St Martin-in-the-Fields church, a spiritual center for both English- and Chinese-speaking Anglicans in London. On Tuesdays, Mondays and Fridays at 1pm, you can drop in on lunchtime rehearsals of various local musical groups.

Major roads leading out of Trafalgar Square include Charing Cross Road, which heads north to Leicester Square; and Whitehall, which leads directly south to Downing Street, the Mall and Buckingham Palace.

The closest Tube station is Charing Cross, but Leicester Square, Piccadilly Circus and Embankment are nearby, as well. Map