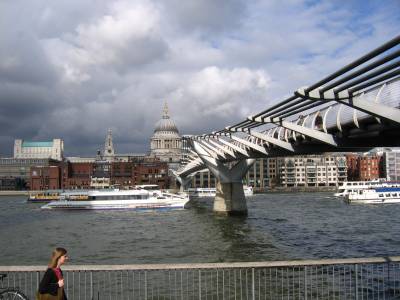 The Millennium Bridge, designed to celebrate the year 2000, was the first new bridge built across the River Thames in London since Tower Bridge opened in 1894. It took two years to build and two years to safely open, but today it’s a truly wonderful way to travel from Bankside to the City of London.

Designed as a pedestrian-only suspension bridge linking the north side of the river around Upper Thames Street with the South Bank, the Millennium Bridge (initially) cost £18.2 million when it (first) opened on 10 June 2000. 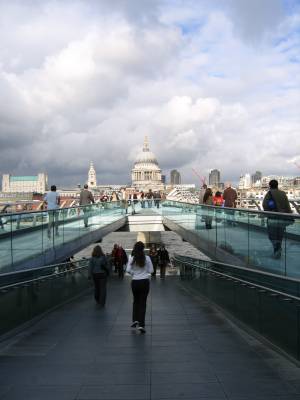 However, it quickly earned the nickname “Wobbly Bridge,” for a design flaw that caused pedestrians to experience pronounced sideways swaying as they crossed. After being open only two days, the bridge was closed for repairs on 12 June 2000.

Fixing the problem required the installation of 89 dampers to absorb excess energy and control the horizontal and vertical movement of the bridge; this cost £5 million and took from May 2001 till January 2002 to complete. The new and improved Millennium Bridge finally re-opened in February 2002.

Directly in line with St Paul’s Cathedral on the northern side and the Tate Modern on the southern, it’s now an excellent vantage point for souvenir photos and a fun way to experience the breeze and bustle of the River Thames.