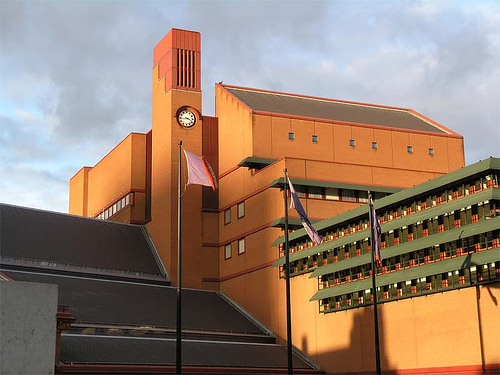 The British Library houses the national collection of books, manuscripts and maps, as well as the national sound archive. Formerly a part of the British Museum, it was established as a separate entity in the late 1970s and opened in its present Kings Cross location in 1997.

The British Museum began keeping published material in 1753, and its collections were publicly available to anyone who visited its famous circular Reading Room (including Charles Dickens, Karl Marx, Lenin, Ghandi and many more). In its modern-day location, the archives of the British Library are still open to the public, but you now need to apply in-person for a Reader Pass before handling any of the books.

The British Library building is light and spacious, with a temporary exhibition space and café. For the casual visitor who’s not interested in neither a Reader Pass nor doing some research, best to head to the Sir John Ritblat Galleryand its adjacent exhibition area. Once you enter the building, turn left towards the bookshop; on the right, you’ll see the sign pointing you towards the Gallery.

The Ritblat Gallery displays the most famous and priceless items in the British Library’s collection, including the Magna Carta; some of the earliest written and printed copies of the Bible, Koran and Torah; Hindu and Buddhist texts; Leonardo da Vinci’s notebook; and papers and writings by Shakespeare, Galileo and Sir Issac Newton. Here you’ll also find original scores and manuscripts by Mozart, Beethoven, Handel and other composers, as well some of the original handwritten lyrics to Beatles songs.

You can also see Captain Cook’s journal from 1775, Lenin’s application for a reader pass to the British Museum, Captain Scott’s diary showing the final entry from his fatal expedition to the South Pole and a myriad other famous historical documents.

The Library itself is equally impressive, and absolutely huge. By law, the British Library must keep a copy of every publication produced in Britain and Ireland; as a result, they currently have over 150 million items and add around 3 million more every year. In order to accommodate this ever-growing collection, there’s a separate building at Colindale Avenue in northwest London (near the Edgware Road) that houses their newspaper collection, including the first copy of the Times from 1788.

The British Library is free to enter and open daily throughout most of the year from 9.30am (11am Sun), with varied closing times throughout the week. It’s closed from 24-28 December and on 1 January.

Located in a very large modern building on the Euston Road, just past St Pancras station (a red brick, Gothic-style building with spires that looks a bit like a cathedral) on the right-hand side.