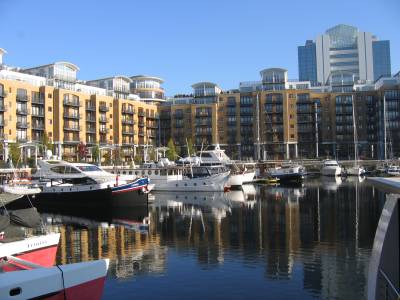 When you walk around London its always interesting to see how the old parts of the city fit in with the new. One place where this is prominent is on the north side of Tower Bridge. Next to the bridge on its west side is the Tower of London which has been around for the best part of a thousand years and on the east side a short nine iron from the Tower’s grounds is St Katherine’s Dock, a gleaming yacht harbour surrounding by expensive apartments and offices.

It’s quite easy for a visitor to walk over the bridge without realising the Dock is where it is as there’s the 800 room Tower Hotel right on the river front shielding sight of it. If you’re on the river walk in front of the Tower go towards the bridge and go through the tunnel underneath, on the other side of the bridge you’ll see the hotel and to the left a small black arch saying St Katherine’s Dock, this will lead into the marina area. 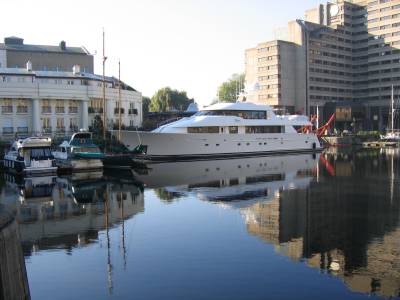 St Katherine’s Dock was originally built in 1828 on the site of an old hospital of the same name, 11,000 people were displaced from the local area but London needed more docks because of the amount of trade coming up the Thames.

The docks were a new design for the time, two docks were dug out, East and West and they were linked to the river by a 180ft long lock. The shape of the docks meant they had a very long quayside for such a small area of water and warehouse’s were built right on the quayside so ships could unload straight into them.

St Katherine’s handled imports of sugar, spices, wines, rubber, carpets, marble and ivory but was also well known for shells, tortoise shell and mother of pearl and feathers. Back in the 19th century it cost £1 to dock and unload a ship for 24 hours. Like most London docks St Katherine’s was overtaken by modern container methods and closed in 1968.

If you walk into the Dock today from the Tower Bridge entrance you’ll come straight to the West Dock, on the right is the back of the Tower Hotel, running along the left side is International House, an office building that has the facade of the old warehouse’s but was actually built in 1983. Moored around the edges of West Dock are a number of large old sailing boats that look like they were built for trade rather than pleasure. 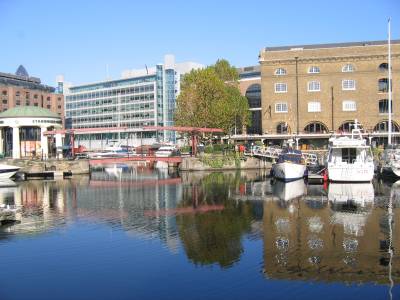 Looking across West Dock to the far side there’s the modern glass building of Tower Bridge House and next to it Commodity Quay which was built in 1986 and is the home of Reuters and the International Petroluem Exchange.

Follow the walkway along by the hotel and you can go straight on or left to St Katherine’s Point where a raised bridge divides West Dock and where Starbuck’s have a prime location with their coffee shop in a circular pillared building.

Go across the red bridge and the building with the clock tower is Ivory House which got its name from the amount of ivory passing through it. Today its been converted into apartments, restaurants and shops for the wealthy types who have their boats in the marina.

Walk past the shops at Ivory House and there’s a small foot bridge that goes over to Marble Quay, named because all the fine quality material from Italy used to be unloaded here. You can get a great view of the East Dock from around the bridge, its surrounded by beautiful apartment blocks and the Dock’s full of boats. 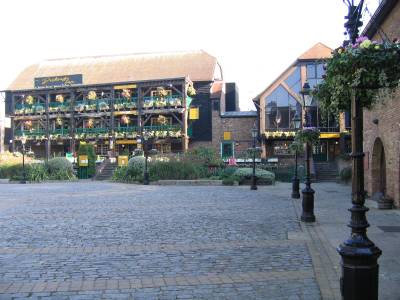 Marble Quay has a large open quayside and is dominated on one side by the three storey Dickens Inn which used to be a brewery and whose timber frame goes back to 1740.
Today its a pub that also has two restaurants in it and this place gets really busy especially in the summer when it draws a trendy young crowd. Also during the summer months free lunchtime emtertainment is put on at Marble Quay. Right next to the Dickens Inn is a large Indian restaurant called Mala.

If you’re out and about in the City and want somewhere quiet and different to eat or have a drink check out St Katherine’s Dock and while you’re admiring the yachts remember it costs about £700 a month to park a 50 footer there.