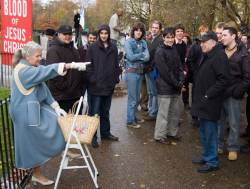 In modern, wary London, with its growing web of CCTV cameras and expanding police powers, anyone lecturing a gathered crowd to speak their mind will most likely be brought to a halt by law enforcement, offered the chance to donate some DNA and possibly quizzed about any terrorist connections.

However, one place where those with the desire to address the masses can still do so (relatively) unhindered is the famous Speaker’s Corner, on the northeast side of London’s Hyde Park where Park Lane meets Cumberland Gate.

The 1872 Royal Parks and Gardens Act made it legal to assemble and address a crowd at Speaker’s Corner, and down the years famous names including Karl Marx, Lenin and George Orwell have taken the opportunity to do so.

If you want to follow in their footsteps, just arrive at the Corner’s paved area on a Sunday mid-morning, bring along a milk crate or step-stool upon which to stand (so you’re visible to the crowds) and away you go. The more eccentric or outlandish your views, the bigger audience you’re likely to draw.

There will generally be multiple people having their say at any one time, each claiming their own space. Subjects range from fundamentalist religion to the government of the day or predictions for the world’s demise. Listeners can feel free to vocally agree or argue a point, but it’s best to avoid being abusive or aggressive. The speeches here should be considered as partial pantomime and unsanctioned self-expression.

Marble Arch on the Central Line is the nearest Tube station to Speaker’s Corner. Map