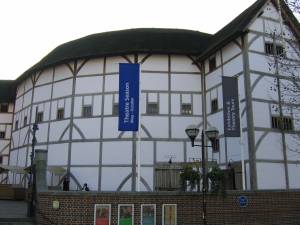 On the south bank of the River Thames, between Southwark and Blackfriars bridges, is the reconstruction of the Globe Theatre, where many of Shakespeare’s plays were first performed.

The original Globe was built in 1599 and owned by the company of actors to which Shakespeare belonged. It was destroyed by fire during a performance in 1613 when a cannon used as a prop misfired, setting alight the timber beams and thatched roof. It was rebuilt, only to be knocked down again by the Puritans in the mid-17th century.

Today’s Globe was built to the Elizabethan plan and finally opened in 1997, 200 yards from the original site; it was the first thatched building allowed to be built in London since the Great Fire of 1666. The current Globe seats 1,500 for performances, compared to the 3,000 in Shakespeare’s day.

With both the stage and the audience open to the elements, performances of Shakespeare’s plays take place between May and September. Year round, you can visit the Globe to take a tour of the theatre and the Globe Exhibition and learn about the costumes and clothes, special effects and music that were used in Shakespeare’s time. Exhibits here also detail how Shakespeare’s plays were published and the reconstruction of the Globe.

During the October to May period, you can take the tour and see the Exhibition between 10am-5pm, daily. In the summer period when performances are held you won’t be able to tour the theatre in the afternoons.

The Globe has a restaurant, cafe and coffee shop which are open all year.

You can start booking tickets for plays in February when they release the details of the summer performances. Southwark is the nearest tube on the south side of the Thames or you could go to Mansion House north of the river and walk across the Millennium Bridge, with the Globe to your left. Map

Visit the official site for the Globe Theatre