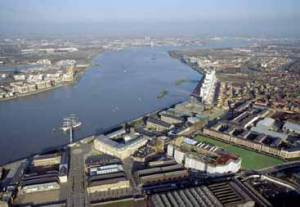 Prior to the late 1990s, many street maps of London would feature a large blank-white area between the south bank of the River Thames, Thamesmead West and Woolwich Arsenal. This formerly secret slice of London was the home of the Royal Arsenal, Britain’s largest center for the manufacture of military equipment and munitions.

It was also the original home of the Arsenal Football Club, nicknamed the Gunners.

In 1997, ownership of the whole 76-acre site was transferred from the Ministry of Defence to the London Development Agency, and the site is currently being converted into 4,200 homes; leisure facilities like restaurants, bars, shops, and cinemas; and light industrial use. The Royal Arsenal Riverside development, directly across the river from London City Airport and a short trip downstream from Greenwich and Canary Wharf, is presently slated for completion by 2015.

The Royal Arsenal was first opened in 1671. In the 1720s, a collection of workshops called Artificers Court and Basin Court were built on the site, and in 1764 a sundial was put up over the entrance; this section of the Arsenal, now collectively known as Dial Square, still survives today (see photo at left). 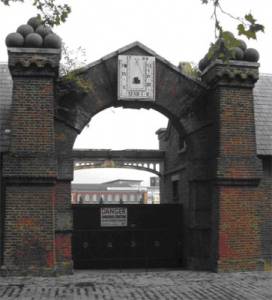 In 1886, a group of armaments workers formed a team called Dial Square and played their early games on nearby Plumstead Common. On Christmas Day 1886, they voted to change the name to Royal Arsenal; in 1891, they became Woolwich Arsenal; and in 1913, changed again to the Arsenal Football Club.

In 2001, a £15 million Royal Artillery Museum, nicknamed Firepower was opened adjacent to the Arsenal grounds. When the Arsenal Football Club moved into the Emirates Stadium in 2006, they asked the RAM if any guns were available to be placed at the new stadium’s entrance; the museum supplied them with two 32-pound, smooth-bore, cast iron guns on iron carriages that had been made at Royal Arsenal in 1859.

To see the development, what remains of the Arsenal and the Royal Artillery Museum, take the SouthEastern train from Charing Cross to Woolwich Arsenal station.