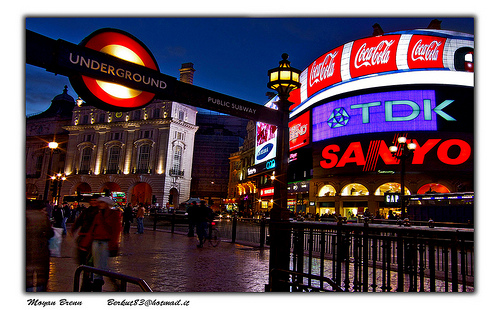 Piccadilly Circus is a busy junction in the heart of central London, as iconic a symbol of the city as Times Square is of New York.

The Circus is the ideal starting point for a visit to the vibrant West End, as the major streets of Piccadilly, Regent Street, Shaftesbury Avenue and Haymarket all meet here.

The Underground station at Piccadilly Circus (on the blue Piccadilly Line) brings you within easy walking distance of Soho, Leicester Square, Chinatown, many West End theatres and the high concentration of shops along Regent and Oxford Streets. 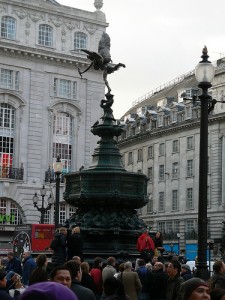 On the south side of the Circus is the famous Anteros statue, a winged archer that tops the 1892 memorial fountain to the late Earl of Shaftesbury. Anteros is surrounded by steps, making it a popular magnet for tourists and locals to sit and people watch.

On the northern side of Piccadilly Circus are huge, wrap-around neon signs that have been attracting big crowds for almost a hundred years. While the signs remain elaborate and exciting, these days giant LED screens are increasingly in vogue.

Because of its central location amongst other busy tourist areas, most visits to London are likely to include Piccadilly Circus. Be sure to stop and have your picture taken at one of the most recognizable locations in the city.