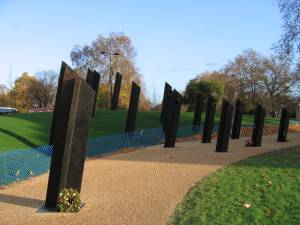 The New Zealand War Memorial was jointly unveiled and dedicated by the Queen and the New Zealand Prime Minister in 2006. Designed to honor New Zealand soldiers who died fighting alongside Britain in both world wars and other battles, this memorial provides a focal point for London’s expat and visiting New Zealanders, especially on Waitangi Day (6 February) and Anzac Day (25 April).

Formally named The Southern Stand, the memorial is comprised of 16 large “standards,” varying heights of cross-shaped bronze set in the ground at a slight angle and facing south. Some have been set into a circular path and some in a grassy bank; six of the standards form the shape of the Southern Cross.

The work of two Kiwis, architect John Hardwick-Smith and sculptor Paul Dibble (who won a design competition), each standard bears text and a sculptured image representing an aspect of New Zealand. The individual standards were built at a studio in Palmerston North on New Zealand’s north island and shipped to London by sea.