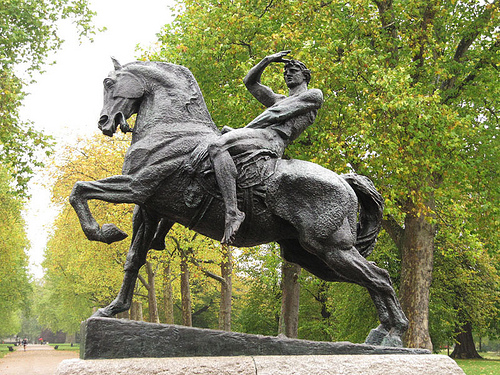 Situated seamlessly adjacent to Hyde Park, 275-acre Kensington Gardens is one of the most grand and popular parks in London. The two green spaces, both Royal Parks, are divided by a bridge over the lake known as the Serpentine.

Built in the 1820s by famed British architect John Rennie, this bridge allows West Carriage Drive to run from the north side of the park near Lancaster Gate, to the south at Kensington Gore.

To the west of the bridge is Long Water, and to the east, the Serpentine Lido, a roped-off area for outdoor swimming. Featuring changing facilities, it’s open daily to the public from June-September.

A short walk from the Lido Cafe is the Princess Diana Memorial, presented by the Queen in 2004. A long, flat circular water fountain set on a gentle slope, the water flows downhill in two directions before meeting in a pool at the bottom. The fountain itself is made from 545 pieces of Cornish granite and you’re allowed to sit on it or paddle your feet in the water. Near the memorial is an elaborate playground for children, also dedicated in Diana’s honor. 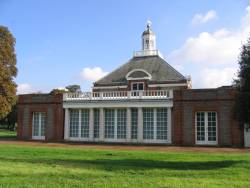 West from the Diana Memorial, across West Carriage Drive and on the left, you’ll find the Serpentine Gallery, a 1934 tea pavillion that was opened in 1970 as an exhibition space for modern and contemporary art. It’s open daily from 10am-6pm, features a gem of an art bookstore, and admission is free.

Similar to Hyde Park, Kensington Gardens features long, straight, criss-crossing paths with avenues of tall shady trees. At its western side, towards Kensington Palace, is the circular Round Pond, dug in the 18th century.

Throughout the park you’ll see large sculptures, some temporary exhibits by British artists, others permanent and designed to honor famous English historical figures. Walking across Kensington Gardens from the Round Pond towards Lancaster Gate, you’ll see a tall obelisk made from red Scottish granite, first erected in 1866 in honor of the explorer John Hanning Speke. Speke and Sir Richard Burton were the first Europeans to find Lake Tanganyika in Tanzania. Speke also found and christened Lake Victoria (after being told about it by locals) and controversially claimed to have found the source of the Nile; at the time of this discovery, Speke hadn’t traced the Nile in entirety and was merely guessing at its source. 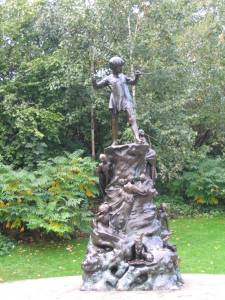 A little ways from the Speke obelisk, next to Long Water, is an ornate bronze statue of novelist JM Barrie’s character Peter Pan. This statue celebrates both the beloved character and Barrie’s 1906 book, Peter Pan in Kensington Gardens. Scenes from the 2004 film Finding Neverland, starring Johnny Depp, were filmed inside the park.

Continue down the lakeside and you’ll come to the Italian Fountains, commissioned by Queen Victoria; these consist of four large ponds, two abreast with a fifth smaller pond in the middle, each with a fountain. At one end is a pavilion with three arches and a square tower, and at the other end, water flows from wall spouts into the Serpentine.

Kensington Gardens features both cafes and refreshments stands, as well as deck chair rental from March to October. The park itself is open year-round from 6am-dusk and free guided walking tours and special events are offered throughout the year.