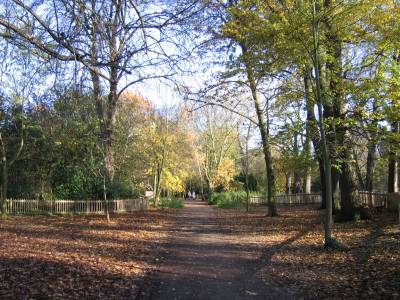 The 54 woodland acres of Kensington’s Holland Park provide a welcome respite from a busy swath of west London. Bordered by Kensington Palace on the east, trendy Notting Hill on the north and Kensington High Street on the south, there are several lovely attractions to be found within the park’s grounds.

On the northern side of  Holland Park, the woods are carved with small clearings and stony, uneven walking/jogging paths. Here you’ll find Lord Holland’s Pond, which features a centrally seated statue of Henry Richard Vassall-Fox, the 3rd Baron Holland and namesake of the park. His pond attracts a great deal of wildlife, including foxes, a couple of types of bats, over 30 species of birds, and even a few peacocks.

The park also features a Japanese garden called the Kyoto Garden, created in 1991 by the Kyoto Chamber of Commerce and dedicated by Prince Charles to signify friendship between Japan and the UK. The centerpiece here is a tranquil waterfall. 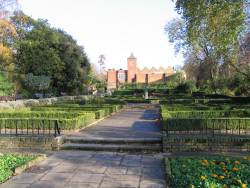 In the center of the park, the formerly grand Holland House is now a youth hostel called YHA London Holland Park. Around the building are large formal gardens with low, clipped box hedges and park benches that provide plenty of quiet places to sit. Nearby are a restaurant and outdoor café, the house’s old orangery (a type of greenhouse), and an ecology center.

Also set within the grounds of Holland House, Opera Holland Park is known for its summer outdoor theater and opera performances, put on from early June to mid-August.

In 2010, a drift (or herd) of pigs was brought into an enclosure near the theatre to clear the land of nettles and brush, creating what will soon be a newly wild  meadow within the park.

The southern section of the park features tennis courts and a large cricket/sports pitch, and on the eatsern side you’ll find a large play area for children.

Nearest Tubes: Holland Park (on the north side) and High Street Kensington (on the south)