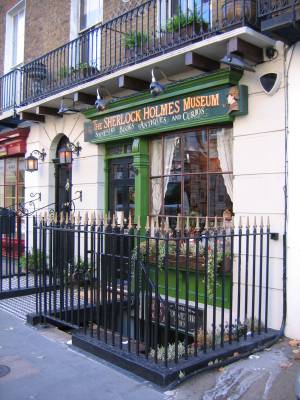 The fictional home of Sherlock Holmes, Britain’s most famous fictional detective, was described by author Sir Arthur Conan Doyle as 221b Baker Street in the neighborhood of Marylebone. As a celebration of Holmes, there’s an actual museum at this address were you can see how the character (theoretically) lived and worked.

In Doyle’s novels, his flawed yet brilliant hero was meant to have lived here between 1881-1904, and there’s a Blue Plaque on the wall outside the museum to, well…prove it.

On the museum’s ground floor, you’ll find a shop selling just about anything Holmes-related, from pipes and deerstalker hats to all of Doyle’s books and stories. You’ll generally be greeted by an actress impersonating Holmes’ housekeeper, Mrs. Hudson. 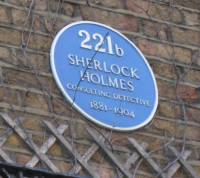 On the first floor is Sherlock Holmes’ study, furnished as it would have looked in Victorian London, with a sturdy wooden desk, brocade armchairs, large fireplace and formal dining table.

On the second floor are the bedrooms of Mrs. Hudson and Dr. Watson, with displays of their personal (and again, fictional) possessions. On the third floor are exhibit rooms with waxwork models of figures from the Sherlock Holmes stories, a nod to the popularity of nearby Madame Tussauds.

This unfortunately hokey (and not entirely non-bizarre) tourist trap is worthwhile only if you’re a bonafide Holmes or Doyle fan; otherwise, feel free to content yourself with an outdoor photo opportunity, free of charge.

The Sherlock Holmes Museum is open every day except Christmas Day from 9:30am-6pm. Tickets are £6 adults, £4 children. The museum is located at the very north end of Baker Street, close to the south entrance to Regent’s Park.