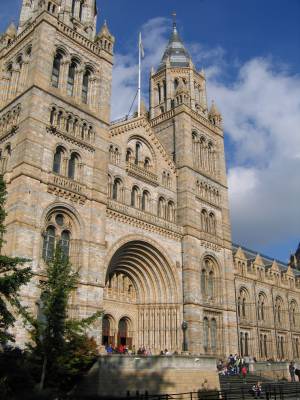 The Natural History Museum, which sits adjacent to the Victoria & Albert and Science Museums in the Cromwell Road area of South Kensington, is one of the most popular attractions in London.

Originally part of the British Museum, by the mid-19th century the natural history collections were growing too large. A competition was held to build a new museum specifically designed for these exhibits, and the current (magnificent) The Natural History Museum was opened in 1881.

The Museum finally became independent of the British Museum in 1963, and is today visited annually by many thousands of locals and visitors.

The Natural History Museum is famous for its dinosaur skeletons, especially an 85-foot long Diplodocus that greets you as you walk through the central hall. However, this enormous shrine to the natural world has about 70 million other items on display.

The museum’s divided into four zones: Red, Blue, Green and Orange. The Red Zone galleries focus on the Earth, the forces that have shaped it, and its place in the universe. The Blue Zone looks at dinosaurs, reptiles, sea life and human biology, while the Green Zone tells the stories of fossils, minerals, birds, primates and a great deal more. 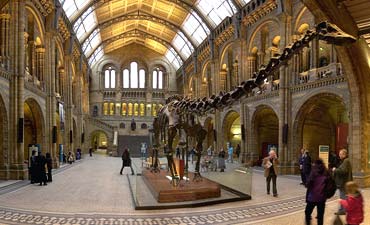 The Orange Zone features the Wildlife Garden and the Darwin Centre, which holds the museum’s 250+ year-old collection of 22 million jar-preserved specimens.

The museum features three cafés and restaurants, a coffee bar, an outdoor picnic area and three shops selling books, gifts and toys. Free maps of the museum are available from the central hall information desk in a number of languages.

Extremely popular during the summer and the Half Term holiday, this is one of the city’s most exciting adventures for children, their families and fans of both science and architecture.

The Natural History Museum is open every day (with the exception of 24-26 December) from 10am -5:50pm. All permanent exhibits are free, but temporary exhibitions throughout the year often require a separate, paid admission.