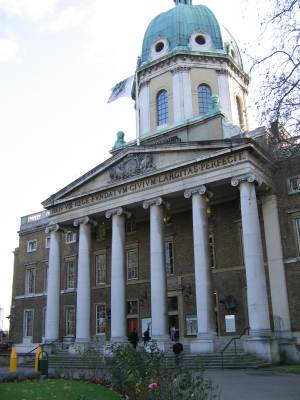 The Imperial War Museum features collections and displays from all military operations that have involved British or Commonwealth forces from 1914 to the present day.

The museum has a large number of permanent galleries which use everything from weapons, uniforms, documents, photos, film and art to tell stories of Britain’s battles, conflicts and wars.

Immediately inside the front doors is a large hall filled with real military hardware from the last hundred years: full-size tanks, artillery pieces, cannons, and hanging from the high ceilings, fighter planes of all stripes.

Here you’ll find bi-planes, a Spitfire and a jet fighter that the Germans had developed and just started using as the Second World War was coming to an end. Also on display are captured examples of the V1 and V2 rockets that Germans used to bomb London in 1945, and a Polaris nuclear missile from a British submarine. 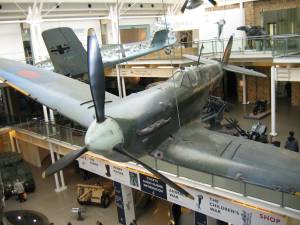 The museum’s galleries, divided by conflict and era, are spread throughout four floors; these floors feature wraparound balconies that open onto a huge main hall, allowing you to view displayed aircraft from all sides.

One of the museum’s most outstanding galleries, the Holocaust Exhibition, explores the rise of Hitler and the Nazis, the mechanics of the Final Solution, and the eventual fall of the Third Reich. While most of the museum is suitable for children of all ages, this particular gallery is not recommended for younger children.

The Imperial War Museum is free to enter, though selected temporary exhibitions will incur a separate admission charge. The IWM is open daily from 10am-6pm, and only closed 24-26 December.

The Imperial War Museum can be found in Lambeth, just past the junction of Westminster Bridge and Kennington Roads. At the area’s Christ Church, the road forks; take the right fork down Kennington Road and a left on Lambeth Road and you’ll see a set of enormous guns from a battleship set on the museum’s front grounds. (Map)