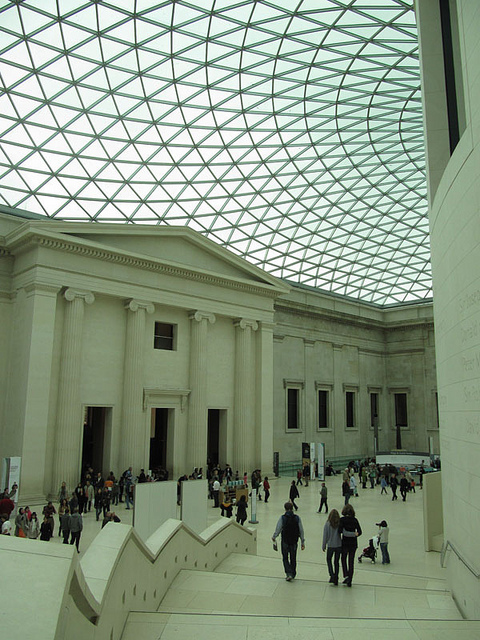 Established in 1753, the British Museum was the first public museum in the world; it remains one of England’s most famous and popular attractions.

Originally created to house the extensive curiosity collections of Hans Sloane (one of 17th- and 18th-century London’s most notable citizens) the museum has spawned both the British Library and Natural History Museum, and grown into Britain’s national museum of human history.

The modern-day British Museum is huge, with three levels of galleries featuring over 7 million cultural artifacts from around the world. Displays are divided and cross-divided into regions of the world, including Britain, Europe, Greece, Rome, Egypt, Africa, the Americas, Japan, Asia, Islamic and more.

At ground level, the dynamic interior Great Court features a spectacular shop, two cafeterias, and the Paul Hamlyn Library, which can help guide you through and research the collections at the British Museum. Up the Court’s gently winding staircase to the top floor, you’ll find the circular Reading Room and the elegant Court Restaurant.

The Reading Room, an immensely valuable domed library open to public to use, is a former haunt of Gandhi and George Bernard Shaw, and where Karl Marx spent years researching and writing about social revolution. It’s now known formally as the Walter and Leonore Annenberg Centre, housing 25,000 books that focus on the world cultures represented in the Museum.

A special feature throughout the British Museum invites visitors to find 100 objects that tell the history of the world, from figurines to tools to ceremonial totems. These items are scattered all around the museum at different kiosks that explain their individual significance in detail.

When visiting the British Museum, it’s best to 1) have a game plan and 2) abandon all hope of seeing everything in one go. Pick up a museum map at the main entrance, stick to only a few galleries at a time to avoid educational and visual burnout, and allow approximately three hours for stress-free exploring.

The British Museum is free to enter, but throughout the year they host temporary exhibitions that require the purchase of separate tickets.

Different parts of the museum are open at various times. The Great Court is open Sun-Wed 9am-6pm, Thurs-Sat 9am-11pm. The Galleries are open Sat-Wed 10am-5:30pm, Thurs-Fri 10am-8:30pm. The entire museum is closed 24-26 December, 1 January and on Good Friday.

During ongoing refurbishment, individual galleries in the museum may be temporarily closed. For a full list of closures, click here.

Located in the Bloomsbury neighborhood, the British Museum is about a ten-minute walk from the Tube stations at Tottenham Court Road, Holborn or Russell Square. The museum’s main entrance is on Great Russell Street. – Map