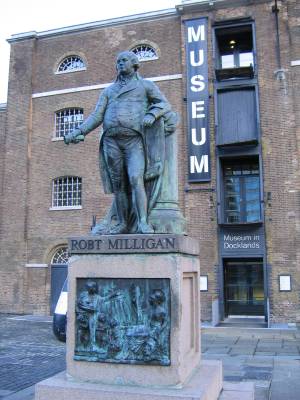 The Museum in Docklands, an offshoot of the Museum of London, opened in 2003 in a network of converted sugar warehouses in West India Quay.

The museum tells the story of London in relation to the River Thames: why and where people first settled along the river, and how invaders such as the Romans, Vikings, Danes and Normans impacted the political, financial and cultural legacy of London.

The museum has three levels, and the friendly staff here will tell you to start on the third floor and work your way down.

The Thames Highway gallery explores London as a port from AD43 (when the Romans were running the show) to 1600. Other third-floor galleries include Trade Expansion 1600-1800, which examines the financial advantages of Britain’s then-growing empire, and Coming of the Docks, which focuses on the construction of Docklands.

There are lifts and stairs to the third floor, including a mobility lift for wheelchair users and wheelchairs, and powered scooters can be borrowed free of charge. There is also a cloakroom and set of toilets on the third floor.

The second floor galleries examine Docklands history from 1800 onwards. A section here called Sailor Town features full-size recreations of the narrow streets, alleys and shops that would have greeted incoming sailors to London about 150 years ago.

The museum has thousands of original Dockland artifacts on display, such as a gibbet, an 18th-century contraption that was hung along the riverbank, into which the bodies of executed pirates were put to rot.

On the ground floor are the main reception, a coffee shop, a bar and dining area and a play section for kids.

Entrance to the Museum in Docklands is free. It’s open Monday to Sunday, from 10am-5:40pm, and closed 24-26 December.

Take the Docklands Light Railway to West India Quay, walk past the Marriot Hotel to the end of the long brick building with the outside bars and restaurants and you’ll see the museum with two big river buoys in front. – Map