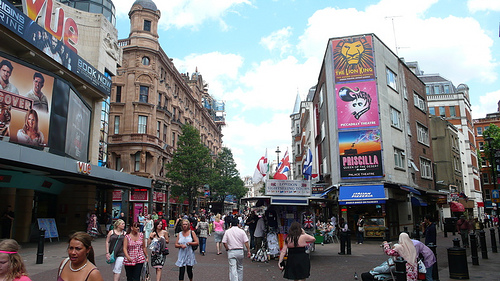 Leicester Square (pronounced Less-ter) is a pedestrian-only plaza in the West End bordered by Soho, Covent Garden, Trafalgar Square and Piccadilly. Throngs of tourists flock to the Square for entertainment, nightlife – and some truly global people-watching.

Back in the early 1600s, Leicester Square was the site of Leicester House, the home of Robert Sidney, the second Earl of Leicester. Far from beloved by his neighbors, Sidney kept his land closed to what had previously been common use. The case went all the way to King Charles I, who eventually ordered that Lord Leicester keep part of his land open; Leicester Field, as it would come to be known, would remain a fashionable and semi-public address for over 100 years.

However, by the late 18th century, residential Leicester Field had been sold and was becoming Leicester Square, an increasingly seedy commercial center for popular entertainment. By the 1900s, the Square had been dubbed “Theatreland” for its sheer number of variety stages. Today, this moniker refers both to the area’s big-ticket studio theaters and its large, splashy cinemas (like the Empire), which have plenty of room to roll out a red carpet, invite a bevy of celebrities and host just about every big movie premiere in London.

During the day, the Square does a brisk business with souvenir stalls (this is the place to come for that Union Jack t-shirt or plastic policeman’s helmet) and impromptu street performances. Many weeknights, audiences flock to the area’s studio theaters (featuring everything from big budget musicals to small-scale cabaret),  but the biggest crowds are drawn on Friday and Saturday nights to area nightclubs (like Cafe de Paris, the Hippodrome, and more).

Around the Square, you’ll find a variety of booths offering discount and half-price stage theatre tickets; the busiest  (and most consistently reputable) is tkts, the Society of London Theatre‘s official discount outlet. Its office is found in the southwest corner of the Square.

While walking around central London, you’re bound to pass through bright, colorful and crowded Leicester Square. While it’s not especially lovely, it’s a convenient place to stop if you want a quick drink or simple meal (the fish and chips at The Mermaid’s Tail are famous city-wide) before or after you catch a film, pick up some theatre tickets, or sample some of London’s most tourist-hyped nightlife. Map