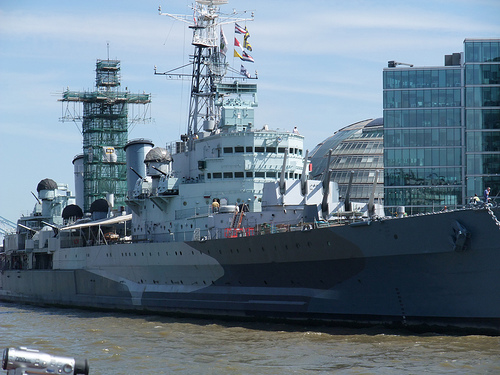 HMS Belfast, a former Royal Navy cruiser, is now a permanent floating museum of maritime heritage. You’ll find it moored beside the Thames between London Bridge and Tower Bridge.

First launched in 1938, the HMS Belfast had a number of roles during the Second World War, including escorting arctic convoys and helping to sink the German battleship Sharnhorst. On D-Day, HMS Belfast opened up on German positions in Normandy at dawn, then continued shelling for five weeks solid.

During the Korean War, she supported United Nations forces, taking hits from North Korean shells in 1952.

After a valiant 32-year career, the Belfast was finally retired in London and opened as branch of the Imperial War Museum. Throughout the year, there are special exhibitions on display here, as well as lectures, re-enactments and children’s events.