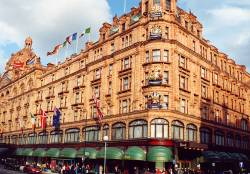 Harrods is the most famous department store in London. Known as “the top people’s shop,” Harrods is frequented by everyone from royalty to the ordinary shopper.

Located on the Brompton Road in the fashionable Knightsbridge area of west London, just to the south of Hyde Park, Harrods has made its reputation over more than 150 years by selling the finest quality products and providing the highest standard of service.

The store’s motto is: “Everything for Everybody Everywhere”

Harrods started business in 1834 when founder Charles Henry Harrod opened a wholesale grocer’s shop at Stepney in the East End of London; in 1849 Harrod moved his shop to its current location. Over the coming years his son built up the business, taking it public in 1889. The current store building was built in 1901 and today the six stories have more than one million square feet of selling space spread over 4.5 acres, with over 5,000 staff working in its 330 different departments.

Harrods has become legendary for its spectacular food hall (the store also has over 20 restaurants inside), fashion and clothing, china and glassware, electronic goods and expensive one-off items. Its annual sales are always a media event; customers queue outside, sometimes for days, in anticipation of incredible bargains, and the sale’s first day is always introduced by an entertainment celebrity.

In 1985, Harrods was purchased by controversial Egyptian billionaire Mohammed al-Fayed, who also owns Premiership football club Fulham and the Ritz Hotel in Paris. Al-Fayed is also the father of Dodi al-Fayed, who died with Princess Diana (his girlfriend) in the 1997 Paris car crash; Mohammed has led a long-running legal campaign that attempts to prove the British Royal Family and MI6 were behind the deaths. For the time being, visitors to Harrods can see two memorials al-Fayed has erected to Dodi and Diana.

However, in May 2010, al-Fayed decided to retire and sold Harrods for £1.5bn to Qatar Holding. Qatar, owned by the Qatari royal family, has promised to make the famous department store even more impressive.

But even now, Harrods makes many London visitors’ top attractions list. For a wealth of tourists, an object (or simply packaging) with the distinctive Harrods logo can be the ultimate city souvenir.