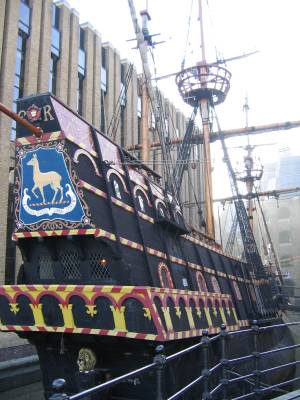 Along the South Bank of the Thames, tucked in beside an office building and a large pub, an ornate, antique sailing ship is surprisingly moored in a narrow dock.

This is a full-size, seafaring replica of Sir Francis Drake’s famous ship, The Golden Hinde, and you’re invited to come aboard.

Sir Francis Drake was one of Queen Elizabeth I’s favorites and England’s most famous seafarers. Between 1577-80, he completed a second circumnavigation of the globe in the original Golden Hinde. After Drake’s death, the Golden Hinde was berthed at Deptford in London in his honor, but the ship eventually developed rot and disintegrated.

In the late 1960s, the head of a San Francisco Bay tour company came up with the idea to create a replica of the Golden Hinde, and the ship was ultimately designed by a naval architect from Marin County. Launched in England in 1973, it was sailed to San Francisco, across the Pacific and Indian oceans, and back to the UK.

The Hinde is now berthed at St Mary Overie Dock, on the South Bank of the Thames, near London Bridge. If you cross the bridge from the north side you’ll see the back end of the ship a few hundred yards along the bank. To reach it, take the first set of steps you see after crossing the bridge and walk past Southwark Cathedral; the road in front will lead you to the dock.

Self-guided tours cost £7 (adult), £5 (child) or £20 (family). Special events with costumed actors are held each month (e.g, Pirate Fun Day, Tudor Battle Workshop, etc.), and generally incur the same charges as self-guided tours. Tickets can be purchased online or from The Golden Hinde Trust shop just a few yards down Clink Street, the narrow street running west from the front of the ship.