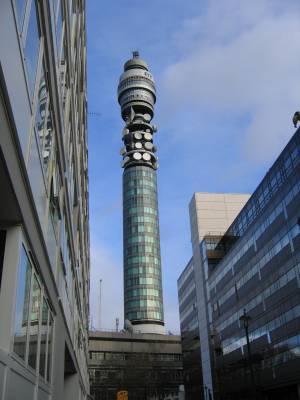 Located on Cleveland Street in Fitzrovia, the BT Tower (formerly known as the Post Office Tower) can be glimpsed from all across London’s West End.

Built in the early 1960s as a telecommunications tower, the BT Tower was opened in 1964 and the public was (temporarily) granted access to the building in 1966. At 620 feet (189m) high, its unique cylindrical shape allows it to pick up microwave signals at wind speeds of up to 95mph.

Initially, in addition to telecoms equipment, the tower housed offices, a souvenir shop, viewing galleries and a top-floor, rotating restaurant called Top of the Tower. In 1971, the IRA set off a bomb in the restaurant’s men’s toilet at the restaurant, and these days BT only uses Top of the Tower (still the only rotating restaurant in the city) for corporate hospitality events. The building’s lease changed hands in 198o, and the entire building has since been closed to general public access.

However, in September 2010, the Tower was opened to the public for one day, during the city’s popular Open House weekend. Rumors had been circulating for some time that Top of the Tower would re-open in time for the 2012 Olympics, but this has been officially denied by BT.

Despite being one of London’s most locally recognizable buildings, the BT Tower was an official UK secret for about 30 years. Because of its use as a relay for microwave communications, the British government kept the Tower unlisted from its Ordnance Survey maps until the mid-1990s, and photographing the building was in violation of the Official Secrets Act.

As you travel around the West End, you can use the BT Tower as a navigational landmark; if it’s in front of you,  you’re heading north.- Map