Big Ben and the Houses of Parliament 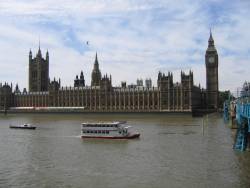 The Houses of Parliament, or Palace of Westminster, has been at its current site in some form since 1042. Portions have been added and changed through the centuries due to fire and bombing, but Westminster Hall is the only still-intact part of the original Palace.

Quite possibly the most famous portion of the Houses of Parliament, though, is the clock tower known as Big Ben.

If you want a feel for how the UK’s political system works, a visit to both will be a truly fascinating part of your visit to London.

In the early 8th century, the Parliament site was originally home to West Minster, a church dedicated to St. Peter. (A minster, in old English parlance, was a monastery; the East Minster was the original name for St. Paul’s Cathedral in the City of London.)  In the 10th century, its strategic location on what was then an island in the River Thames made it attractive to royals like Edward the Confessor, who conscripted construction of both Westminster Palace and its adjacent Westminster Abbey. Between the reigns of William the Conqueror and Henry III, Westminster was increasingly established as the seat of English power; the latter monarch was the first to commission a royal throne here.

Between the 13th and late 14th centuries, the original Parliament was held in a series of rooms around Westminster, from the King’s bedroom to St. Stephen’s Chapel and the Queen’s Chamber. In 1512, when fire destroyed much of the palace, Henry VIII abandoned Westminster in favor of the Palace of Whitehall, and Westminster was re-fashioned as the dedicated Houses of Parliament.

Improvements were made to the aging buildings throughout the 17th century, but all were largely destroyed in a huge fire in 1834; extensive rebuilding ensued, including the construction of Big Ben. The House of Commons was again destroyed by German bombs in 1941, but has since been entirely rebuilt.

Today there are two separate chambers to Parliament, the House of Commons in the north end and the House of Lords in the southern end. These Houses officially remained the royal Palace of Westminster until control finally passed to Parliament in 1965. 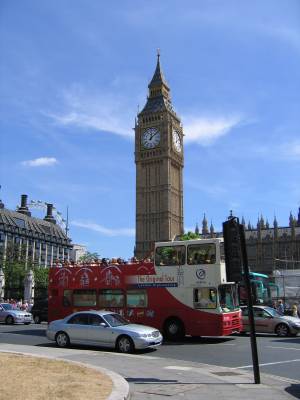 Big Ben, built in 1859, got its name from Sir Benjamin Hall, a fomer Chief Commissioner of Works. The actual Big Ben is the bell inside the tower, which Hall ordered for the renovated Palace in the 1850s. The 14-ton bell, which chimes every hour, rests inside a 316 ft. (96m) tower with a four-faced clock, each face 21 ft. in diameter. The clock tower is illuminated each night and every New Year’s Eve; across the UK, TV channels focus their cameras on the clock as the countdown to England’s new year approaches.

For overseas visitors, a tour of Parliament takes a bit of creative scheduling; 75-minute guided tours are available to non-UK residents only during the Summer Opening (generally late July to early September) and on Saturdays.

During sitting sessions of Parliament, it’s possible for non-UK residents to attend debates and watch committees. For debates in particular, though, while UK residents may request tickets ahead of time, non-UK residents will only be admitted if space remains; to try your luck at a free seat, check opening times and line up outside the Cromwell Green visitor entrance. Expect a wait of approximately 1.5 hours.

The Houses of Parliament are located on the north bank of the River Thames, next to Westminster Bridge. The nearest Tube station is Westminster. Map