Though the London Eye is one of London’s (and the world’s) most popular attractions, several of  the surrounding neighborhoods are in the midst of evolving from working-class to trendy and/or commercial to residential. In general, staying near the London Eye means immersing yourself in the excitement of big-city life, with a bit of grit and grime.

Outside of Westminster and Camberwell, there is little access to parkland, focusing instead on a glimpse of life beside the River Thames. In addition to the Eye, you’ll find many of the city’s biggest attractions nearby, especially in Westminster and the popular South Bank area. However, to leave this heavily touristed part of town in just about any direction, you’re in for long walks and/or lots of time on the Tube.

Here is a map of the general area around the London Eye: 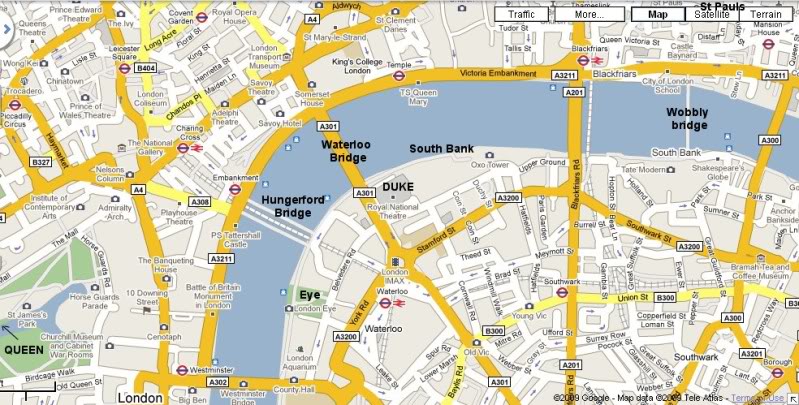 Set at the southern edge of the West End alongside the Victoria Embankment Gardens, sandwiched gently between historic Holborn and heavily-touristed Trafalgar Square, the Strand offers ornate buildings, close proximity to the theatre district and citywide access via the well-connected Charing Cross Tube station.

Strand Palace Hotel
£-££
372 Strand, London, WC2R 0JJ
A polished budget hotel, especially for its surroundings. Features a buffet restaurant, traditional British brasserie (with roast dinners), two bars (one with a theater theme, the other serving afternoon tea) and and an on-site pub. Three levels of rooms, two of which include access to the Virgin Health Club across the street.

The Savoy
££££
Strand, London, WC2R 0EU
One of London’s most unique luxury hotels, this half-Edwardian, half-Art Deco landmark was re-opened in late 2010 after a long renovation. Featuring one of the city’s best afternoon teas and a chocolatier, as well as two on-site restaurants (French and British) and two Art Deco bars. The wide variety of suites (family, two-bedroom, river view, etc.) are decorated in either period style and include toiletries from local perfumier Miller Harris.

This neighborhood is evolving, but still a bit rough around the edges. The area features 36-acre Ruskin Park, which includes formal gardens planted in 1907 and a children’s play area; the Camberwell College of Arts and an active gallery culture; and a thriving Greek community with several good restaurants (e.g., Vineyard Greek Taverna). The Camberwell Green bus interchange makes the area easily accessible from much of the city within 10-20 minutes.

Church Street Hotel
££
29-33 Camberwell Church Street, London, SE5 8TR
With quirky mix of Spanish architectural details — like an antique church altar at the reception desk — and a modern Iberian restaurant, this hotel feels like a playful slice of Southern European vacation in London. Most rooms are singles or doubles, though there are a few larger suites and a family room; choose from ensuite or shared bathrooms. Breakfast is included and features homemade baked goods and London-local specialties like Monmouth Coffee and Neal’s Yard dairy products.

Near Brick Lane and its Indian/Pakistani restaurants and market, formerly scruffy Shoreditch is known for art galleries, bars and design stores; however, gentrification hasn’t robbed the area of its numerous strip clubs. In the summertime, this neighborhood is home to the  Shoreditch Festival of art, music and canal-adjacent living.

Boundary
££-£££
2-4 Boundary Street, Shoreditch, London E2 7DD
Another great idea from interior design giant Joseph Conran, this is a restaurant that features 12 stylishly furnished guest rooms; all are based on the design aesthetic of famous architects and furniture designers (including Conran himself). Free wi-fi and use of an iPad come with each room, and in addition to the wine-focused Modern British restaurant, there’s a delicious bakery and coffee cafe.

The Hoxton
££-£££
81 Great Eastern Street, London, EC2A 3HU
This 205-room hotel, both cutting edge and cozy, is famous for its quarterly room sale – when 5 rooms go for £1, another 5 for £29. Rooms come with Pret a Manger mini-breakfasts (the hotel is owned by the bakery chain) and down duvets, and lounges feature fireplaces and comfy sofas. The on-site restaurant, with an open kitchen serves a combination of American and British grill cuisine.

There’s plenty to keep kids amused in this area, set alongside the Thames between the Golden Hinde and the Globe Theatre. Southwark is known for its cathedral, the Clink Prison Museum and Borough Market, where you can start the day with caffeine, free bread and jam at Monmouth Coffee.

Southwark Rose
££
43-47 Southwark Bridge Road, London, SE1 9HH
There are 84 relatively small, modern guest rooms here; 5 are designed for disabled access and 6 for families. The sixth-floor restaurant offers city views and serves international cuisine; the bar is open all day and into the evening for coffee or cocktails. There’s a fitness center and sauna, and free wi-fi throughout the hotel.

A largely commercial district, Vauxhall is home to the British Secret Intelligence Service (MI6) headquarters and a large array of lively gay bars and clubs that welcome the entire community. The St George Wharf apartment and office complex dominates the riverside skyline.