The north London neighborhood of King’s Cross, adjacent to Camden Town and Bloomsbury, is home to the British Library and St Pancras Station. Most of its surrounding areas are popular with travelers on a budget, with the exception of Fitzrovia and Marylebone.

These two latter neighborhoods, in addition to Bloomsbury and Holborn, tend to appeal to more mature, sophisticated travelers; Marylebone also appeals to families who aren’t on a tight budget and looking for proximity to Regent’s Park and the Zoo, as well as several other attractions for children.

Euston Station is popular with backpackers and families on a budget, and Camden appeals largely to younger travelers looking for lively pubs and inexpensive meals. King’s Cross itself appeals to both budget travelers and those who are simply making London one stop amongst several on a European trip.

Here is a map of the King’s Cross area: 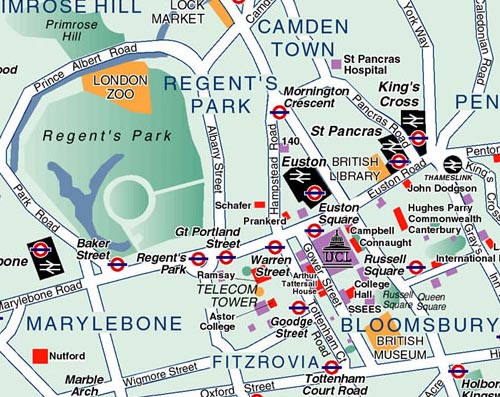 Between Marylebone and Bloomsbury in central London, Fitzrovia offers both an intellectual, residential vibe with leafy squares and an increasingly artsy, fashionable crowd. The character of the neighborhood varies widely between low-income and upscale, and offers little diversion besides the restaurants and bars in its hotels.

Sanderson
£££-££££
50 Berners Street, London, W1T 3NG
Sleek and swanky, this hotel feels and looks like an art gallery, and attracts a young, hip and late-night partying crowd. Rooms range from a luxurious version of standard to a penthouse and apartment; one king room even features its own gym. The huge full-service spa has 14 treatment rooms and the gym’s equipment is state-of-the-art. Restaurant cuisine is French-Malaysian, and both gorgeous, design-y bars are generally hopping.

Camden is both one of London’s most bustling commercial areas and its most peaceful. The farther north you go, the more heavily-touristed the area becomes, featuring a glut of kitschy clothing and souvenir shops, tchotchke stalls, theme restaurants and nightclubs. Towards the center, closest to King’s Cross and St Pancras Station, you’ll find whole blocks of lively bars and the youth-oriented Roundhouse Theater. At its southern edge, you’ll find Regent’s Park, quiet canals and the London Zoo.

York & Albany
£££-££££
127-129 Parkway, London, NW1 7PS
The only hotel in celebrity chef-entrepreneur Gordon Ramsay’s extensive purview, this is one of London’s most charming places to stay. Overlooking beautiful Regent’s Park, there are only 10 unique rooms (standard through suites), furnished with period antiques and including a full English breakfast. The on-site English-country deli features oven-fired pizzas and custom picnic hampers.

Home to some of London’s oldest buildings and monuments, this neighborhood encompasses the city’s historic centers of justice and journalism. Close to the West End and the British Museum, repeat visitors to London could spend hours/days here exploring unique attractions and wandering quiet back streets.

Popular with young travelers on a budget and tourists who are making London one stop amongst many, King’s Cross is adjacent to Camden Town and Bloomsbury, and best known as home to the British Library and St Pancras Station. St Pancras, the ornate hub for the Eurostar and many UK-based trains, also houses a fancy mall with a wide variety of shops, several good restaurants and a popular champagne bar.

Megaro Hotel
££
23-27 Euston Road, St. Pancras, London, NW1 25D
Rooms come in three sizes: superior, which are very small; executive, which is a great deal larger; and deluxe, which are about the same size as executive rooms, but also offer robes, slippers, and an arrival snack. The bar is bright and modern with a full array of wines, cocktails and beers, and the stylish wood-floored restaurant offers British/Italian cuisine.

Rough Luxe
£££
1 Birkenhead Street, London, WC1H 8BA
Simultaneously one of London’s most fabulous and funky boutique hotels, each of the 9 rooms has an entirely different design and artwork; most are small and have ensuite bathrooms. The dining room serves only one meal, an artisanal afternoon tea for £30.